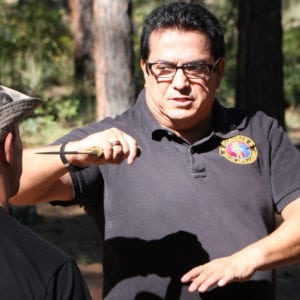 Master Corona has been teaching martial arts since 1971 and has been running Sulsa Camps since 1990.  He is a “teacher’s teacher”.  Over his many decades as an instructor and school owner, he has taught thousands of students and has awarded over 100 Black Belts.  Many of his students have become instructors and have opened schools of their own.

Due to his noteworthy ability and skills, Master Corona was selected by local law enforcement agencies as an expert trainer for police defensive tactics, including personnel from DPS, Phoenix, Glendale, Tolleson, Buckeye and Tempe Police Departments.

His studies have included Judo, Aikido and Jujitsu under the direct tutelage of renowned Master of Japanese martial arts Jsuneji “Tony” Sakakibara, graduate of Japan’s International Kodokan training center, as well as Sensei Robert Corrella.  He studied Hwa Rang Do under Grand master Dr. Joo Bang Lee. After an extensive full time apprenticeship, Master Corona became one of the first Americans to receive the Master Instructor Level in Hwa Rang Do.  He has served as special weapons/tactics hand-to-hand combat instructor for the United States Marine Corps and combatives instructor for the US Army Special Forces.  Additionally, he is President and Master Instructor of CMAA Inc (Pung Wol Kwan).

Master Corona lives and continues to teach in Phoenix, AZ

We use cookies to ensure that we give you the best experience on our website. If you continue to use this site we will assume that you are happy with it.Accept