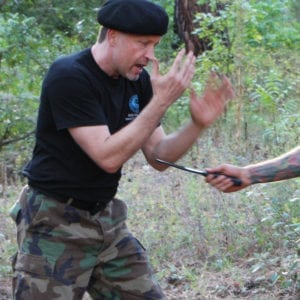 Mr. Stallard joined his first Tae Kwon Do class at age six, and has been studying the martial arts ever since.  In his early twenties, he apprenticed under Master Corona in Hwarang Do and later earned his Master Instructor level at CMAA.  He is trained in small arms combatives and CQB tactics through Maricopa Tactical under its founder Mark Volpone.  ​Throughout the 1990s, while working as a security consultant and bodyguard, Mr. Stallard developed the Advanced Combative Tactics (A.C.T.) System, which he used in training his team of bodyguards. Later he used his revolutionary system to create a self defense video and establish A.C.T.  as a core curriculum of  self defense for non-martial artists.  This system is still taught at some colleges today as part of their justice studies program. He has owned and operated his own MMA gym as well as worked at Elite Combat Sports where he was valued for his clinching and take down skills.

Master Stallard draws upon his extensive experience in the martial arts to deliver accessible and valuable skills to a diverse population of learners.   He uses science, practicality, human psychology, and an understanding of how combat works to modernize and update martial arts instruction.  He excels at adapting his instruction to meet the needs of his students, whether he is teaching professional security specialists, law enforcement personnel, MMA competitors, four-year-olds, or a women’s self-defense class.

He remains an active student of combat and has taught at Sulsa Camps for the last 20 years.  He travels and does seminars across the US and continues his own education in BJJ at Phantom Brazilian Juijutsu in the Seattle area.

We use cookies to ensure that we give you the best experience on our website. If you continue to use this site we will assume that you are happy with it.Accept